How have you been? I always enjoy hearing from you, so be sure to reach out and let me know.

Things in my neck of the woods have been pretty good. My cold seems to have finally passed except for what we call that "left over junk" stage, lol. But other than that it's been a relatively quiet time.

The hubster & I recently celebrated our 21st wedding anniversary — kind of low key this year, but enjoyable. Our wedding cake was chocolate with raspberry filling, so every year we celebrate with something that has both flavors. This year it was a really really good Greenwise chocolate chunk brownie from Publix, with some raspberry sauce drizzled on top. Soooooo good.

Our favorite story about this tradition was the time we were in Paris, and the restaurant we dined in to celebrate our anniversary didn't have anything chocolate/raspberry on their dessert menu (but hey, you can't beat dining in the Eiffel 🗼🗼🗼 ... and yes, we did have dessert! 🍰)

But in keeping with the tradition, we then went dashing thru the streets of Paris before it hit midnight looking for something that would work. Luck was on our side as we spied a pâtisserie that happened to be open late, and they had one perfect eclair with chocolate icing left —and you guessed it, filled with raspberry filling! How cool is that?

We took it back to where we were staying, uncorked a bottle of red 🍷🍷& enjoyed our eclair a few minutes before the stroke of midnight ... just in time to keep the tradition going ;-)

Has luck always been with us in our adventures? Um, heck no ... that's what adventures are all about! But this time it was ☘️☘️☘️

Let's talk art (be sure to read 'til the end where I'll be revealing the surprise twist on my newest piece, Becoming Visible: Frida.)

Here's a painting by artist, Frida Kahlo that has always fascinated me... 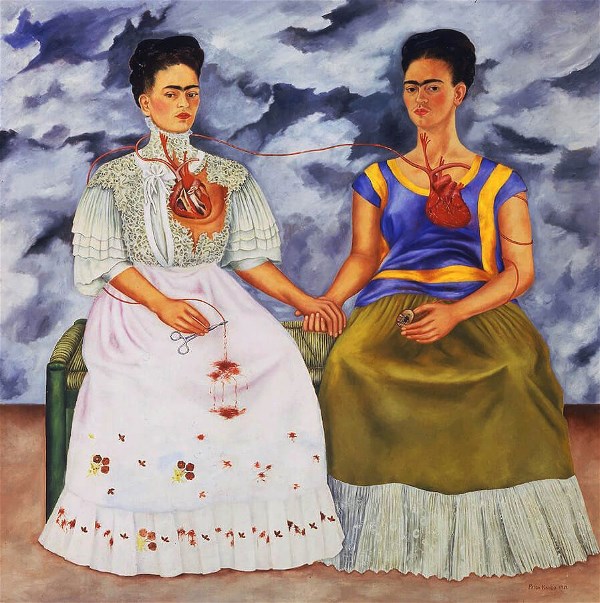 So here's the thing about Frida's work ... she didn't hold anything back. And because typically her paintings were allegories for her life's story & internal state, they are definitely NOT for the faint of heart.

In the painting above, she had just divorced the love of her life, Diego Rivera — who had broken her heart 💔 by sleeping with her sister, Cristina. It shows both the traditional & modern versions of herself, and the depths of their shared, mutual pain.

Her love for Diego was immense, and so was her suffering at his ultimate betrayal.

She used her paintings as a way of showing her internal suffering when so much of the real world expected her to hide it away. And as the audience, we are so fortunate that this was the path she chose for her work.

Here's a photo of Frida & her sister — and also one of her & Diego. 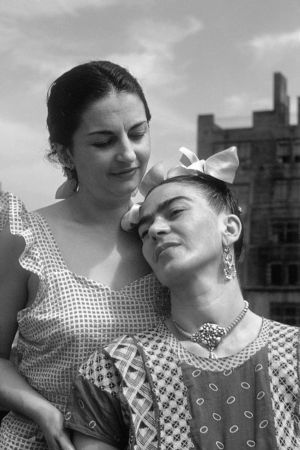 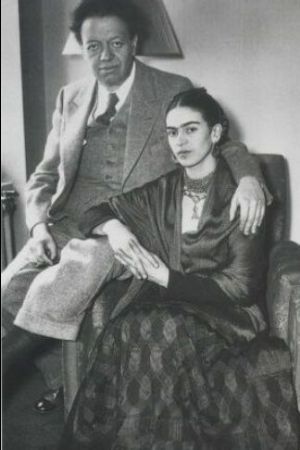 “I love you more than my own skin.” ― Frida Kahlo

Now for the surprise twist in this newest piece, Becoming Visible: Frida!

Remember the fan I used to cover part of Nina Simone's mouth in the last piece to emphasize the fact that she never intended to be a singer? All she ever wanted to be is a classical pianist,  how sad it would have been for all of us if she had never sung on stage.

It would have been equally sad for so many if Nina Simone had not used her voice as a changemaker & activist in the civil rights cry of injustice that was (and still is) going on in our world.

But she did, and we are left with her brilliance & heart because of it. 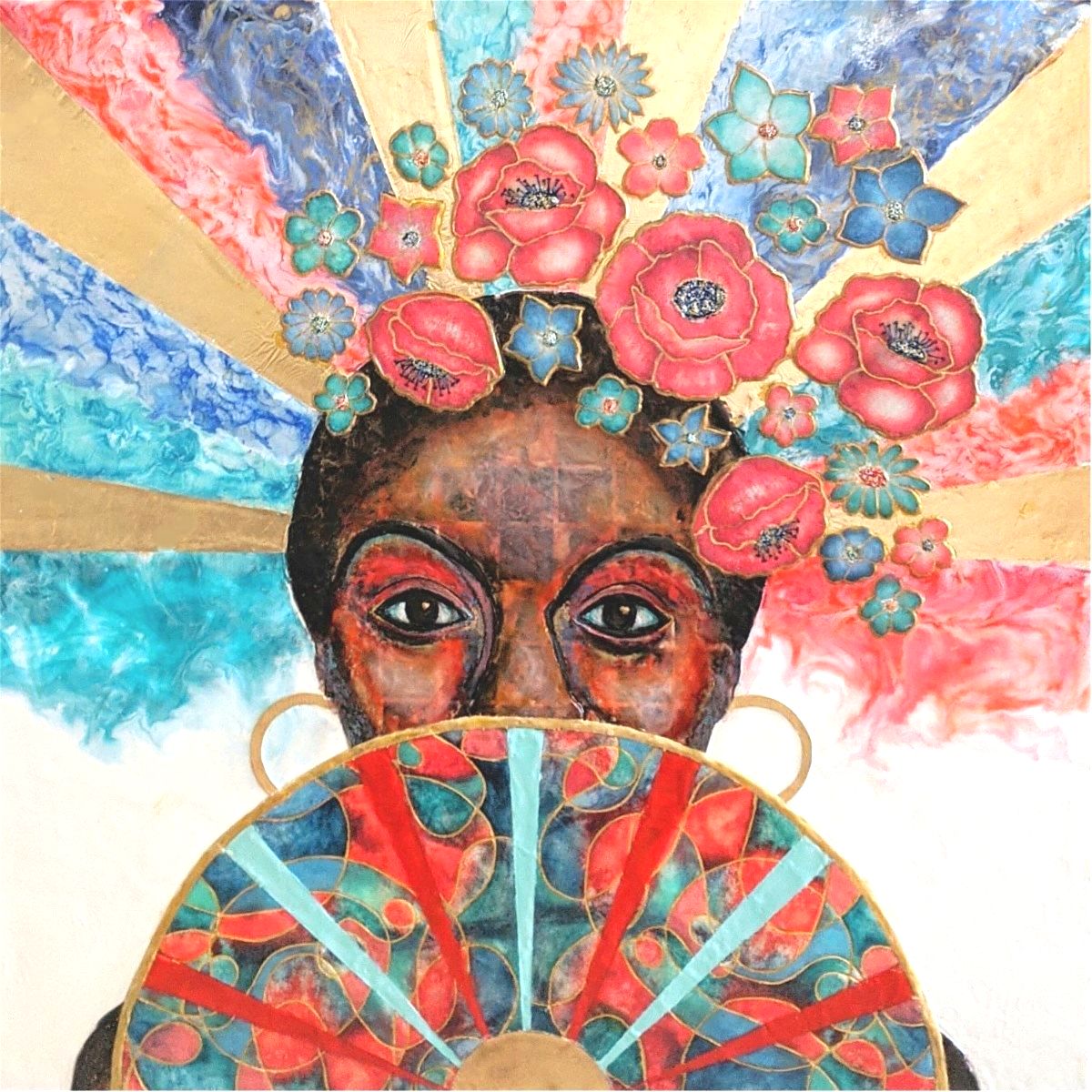 Well, what if Frida Kahlo had decided to play small?

Perhaps not even becoming an artist in the first place, let alone one who used her talents to voice her pain thru her work — and not only her own pain, but the universal suffering of the human race?

How much smaller all of our lives would be if she had remained masked & hidden, as society wanted her to be  — especially for a woman living in the 1930's & 40's.

I'll be using a mask for Frida, reminding us that she could have stayed hidden away, but with courage & heart she chose not to.

Instead she unmasked her pain & internal turmoil thru her work, and she also used much of her art to show the suffering that women endure in a world that wants us to remain quiet, unseen & oh so very small.

I know, it will cover much of those intensely beautiful Frida Kahlo eyes, but I promise to keep parts of them revealed! 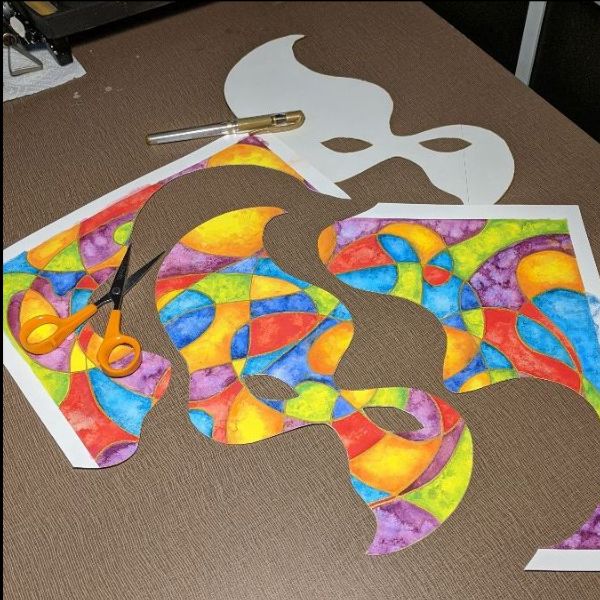 I hope by hiding her eyes behind a mask, it will remind & inspire all of us to find the courage to unmask ourselves, and be seen.

To become visible ... even when it's hard.

Even when others don't want us to.

This one will be finished soon, and then the big reveal! Keep an eye out on my Instagram stories for final process videos.

Have a beautiful weekend, and don't forget to go run & jump & play in those fall leaves 🍁🍂🙆🎉