Today we're going to talk about a painting done by a Russian artist who most consider to be the father of abstract art, Wassily Kandinsky.

He lived from 1866 to 1944, and created the majority of his work during the first half of the 20th century. In addition to his Russian birthplace, he also lived a great deal of his adult life in Germany & Paris, and is well known for being one of the central teachers & artists at The Bauhaus, a highly regarded art & design school in Germany.

These two events were to shape his entire life's work:

He wrote this about the experience:

"That it was a haystack, the catalogue informed me. I could not recognise it. This non-recognition was painful to me. I considered that the painter had no right to paint indistinctly. I dully felt that the object of the painting was missing. And I noticed with surprise and confusion that the picture not only gripped me, but impressed itself ineradicably on my memory. Painting took on a fairy-tale power and splendour." — Wassily Kandinsky 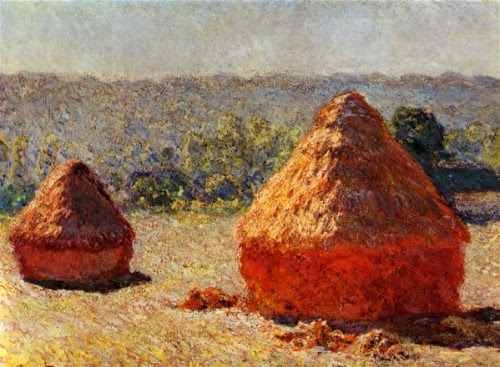 These events ignited an internal passion which led him to explore the connections between color, shape & music for the rest of his life.

Not surprisingly, since he associated music with color & form, he grouped his paintings into 3 major types:

We're going to focus on a single one of his paintings (which is also probably his most well known), Composition VIII: 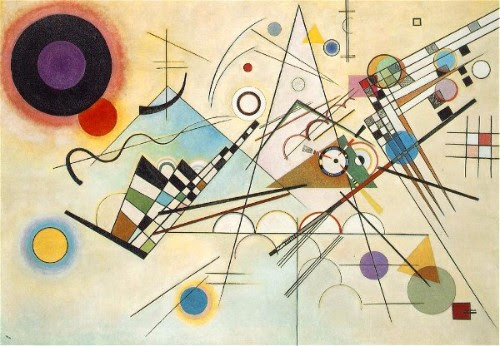 This is a great example of the connection between color, form & music in his work. To anyone who took music  instruction as a child — this may take you back to your earliest memories of the tick, tick, ticking of the metronome's back & forth rhythm.

I know that when I listen to classical music especially, I can't help but see shapes & lines. And like this painting, in my mind's eye I see compasses, pencils & geometric shapes flying around everywhere. And after creating the encaustic & cut paper piece below while listening & dancing to jazz music, I also realized how much his work also looks like how jazz sounds. He must have been one cool cat ;-)

Kandinsky's Composition VIII has a true rhythm to it, and although overall it's quite a cacophony of line, shape & color — it feels very peaceful & orderly — as if a true maestro is in control (which Kandinsky was). The enormous amount of negative space also contributes to its overall sense of orderliness & calm.

Another reason I chose this particular Kandinsky painting, is because I love this video, and wanted to share it with you! Take a few minutes to watch it. You will see different parts of the painting come to life to the beat of the music.

Kandinsky created several studies leading up to this painting. And like all good musicians who spend hours rehearsing, when he finally stepped up to his easel — he stayed in the moment & using all of those practiced skills, allowed the painting to take on a life of its own.

Kandinsky also felt strongly that color was the best way for an artist to communicate the spiritual nature of a piece.

He had this to say about it:

"Color is a power which directly influences the soul." ~Wassily Kandinsky

You can get a better feel for his brilliant use of color from this small subset of his paintings below. As you can see he went through several iterations & progressions with his work — as any real master, given the years, will do. 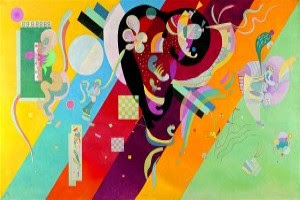 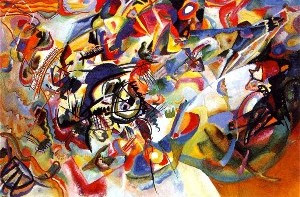 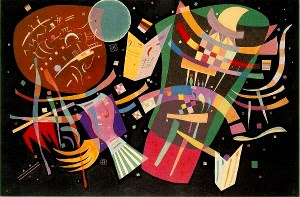 The overall arc of his life's work was meant to convey a strong sense of spirituality, something he wrote & talked about continuously.

Here's one of my favorite quotes of his on the matter:

"Lend your ears to music, open your eyes to painting, and stop thinking! Just ask yourself whether the work has enabled you to 'walk about' into a hitherto unknown world. If the answer is yes, what more do you want?"

Indeed, what more could any creative truly want? Or need, for that matter.

I would love for you to take a moment of your time to scroll down to the comments section, and share your insights about his work — or about art in general. Let's talk shop...