This week we're going to dive a little deeper into the art of famous pointellist artist, George Seurat. He was a French painter living in Paris during the second half of the 19th century. Unfortunately, he only lived until the very young age of 31. 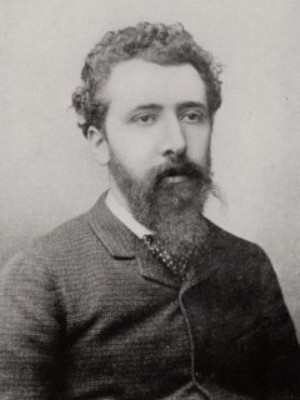 For the brief period of his artistic life he certainly made a lasting impact on the lives of many artists & on their work — both his contemporaries, and those artists who followed after him.

His artistic life was like that of a shooting star, very brief in its visible existence, but leaving a trail of light & beauty behind.

These are two of the many drawings he did early in his artistic career. 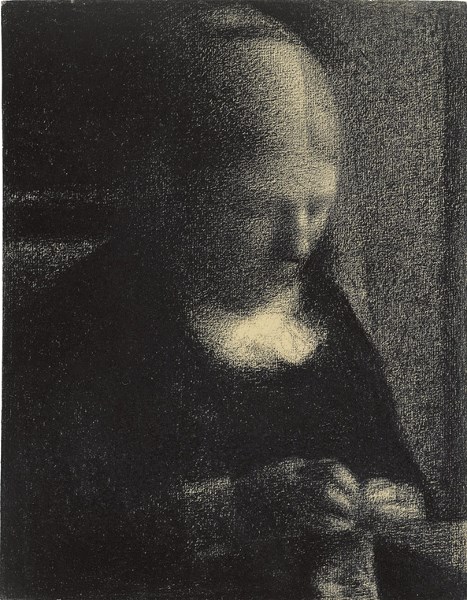 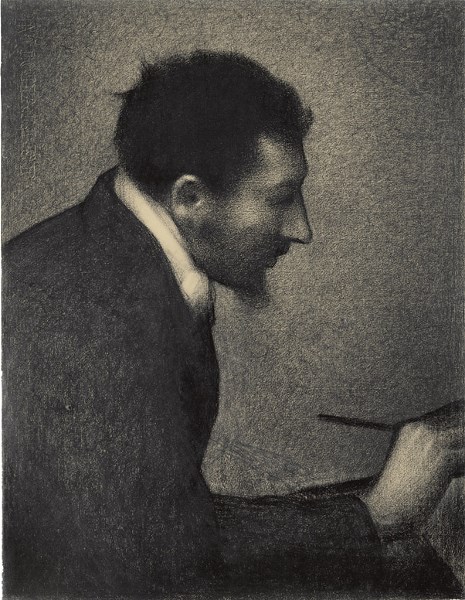 The first one is of the artist's mother peacefully & mindfully working on a piece of embroidery.

The second is of his dear friend & fellow artist, Edmond Aman-Jean. They attended art school together, and also shared a studio. It was the very first of Seurat's work that was publicly exhibited — shown in the Paris Salon of 1883 shortly after his 23rd birthday.

Seurat made many drawings with "conté crayon" — a mixture of powdered graphite & wax molded into a stick. His skillful use of these sticks gave his drawings an ethereal luminosity, and a lovely balance of light & dark.

It's worth googling "Seurat drawings" to get a further sense of their beauty, and the huge number & variety of them he did in his short life.

I'm sure it was because of these drawings he was able to hone his keen sensibility to light & dark, and his extraordinary ability to reduce his subjects to their basic shape & form.

Look how luminous this painting is — it just glows! 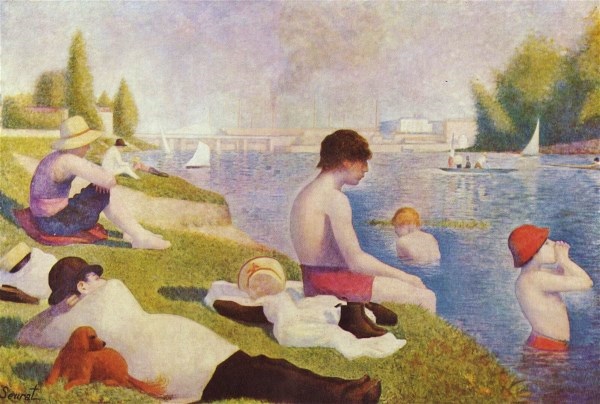 And every single object in the painting is reduced to its essence. There's a brilliant economy in what he felt was truly important to the overall painting. 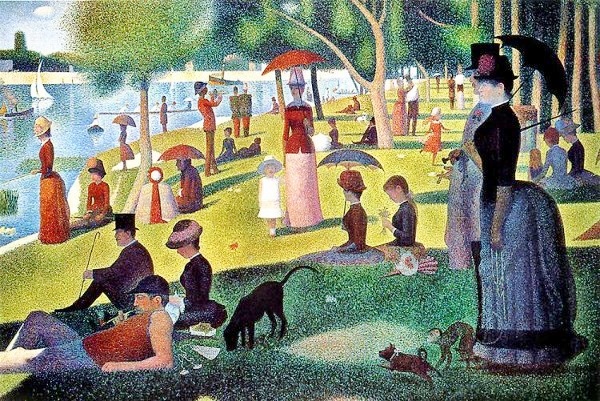 A Sunday Afternoon on the Island of La Grande Jatte' (1886)

Seurat is one of those artists whom I would have loved to have met, so I could  pick his brain to get a deeper understanding of the many observations & thoughts he had about science & art.

The above painting which hangs in the Art Institute of Chicago measures at approx. 7' x 10' — a huge painting & a monumental undertaking for sure. He spent two years working on it, doing many sketches & studies along the way.

This gives you some idea of how meticulous & strategic he was in his art. 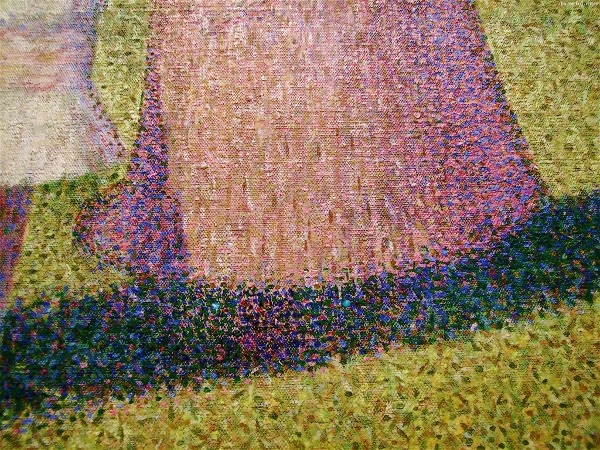 He voraciously studied the findings of scientific writers & chemists of his time on the optical qualities of color & light. He then applied these findings when creating his art.

The technique he used has been coined pointillism, but let's not get hung up on the terminology. Instead, let's talk about what it is, and why it's so fascinating.

These scientists observed that if you put two colors next to each other, from a distance the eye perceives them as combined into a third color. Also, the unadulterated colors when juxtaposed have a tendency to illuminate each other until they sparkle with light.

I have included some close ups of his paintings so you can get a better feel for this innovative & daring painting technique that sets him apart from those artists who preceded him.

Instead of mixing colors on his palette as most artists do, he applied strokes of pure color side-by-side. Thus achieving a more luminous work of art.

Do you see this in his paintings? The intense glow? Well by gosh, that's how he achieved it. Do I get excited about this stuff? Heck yeah!

I love science — it fascinates me that art & science are so closely related. It was actually chemists who were the first to develop many of the art mediums & pigments we're still using today. 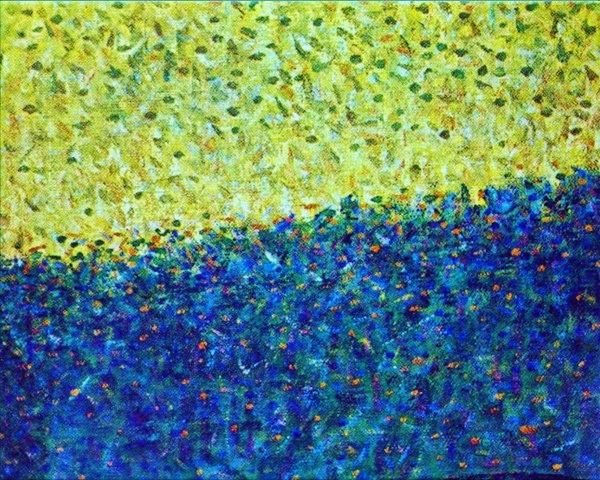 Did you see the yellows, golds & greens laid side by side in the painting above? And the various shades of blue & green put down in his masterful strokes? This is a man who has intensely studied & observed color, and its optical effects.

He was a color poet, a master of simplifying form, and a meticulous craftsman who was able to put to good use what he learned in his very short but brilliant life as an artist. 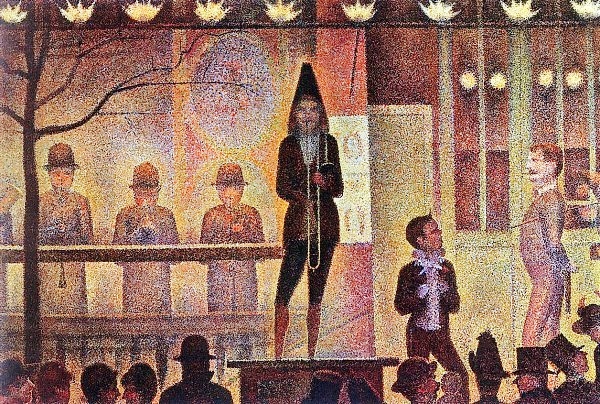 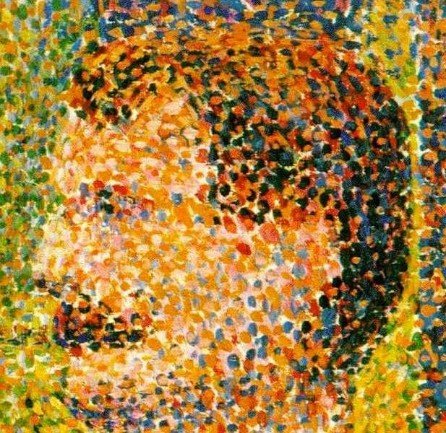 The above close up shows Seurat's strokes of pure orange, black, green, red & blue in the man's hair. But if you look at it from a distance (see the complete painting "Circus Sideshow" above) the eye perceives his hair as being brown.

But what a beautiful, sparkling & complex brown it is!

He understood the science of color, and used it wisely in his paintings. 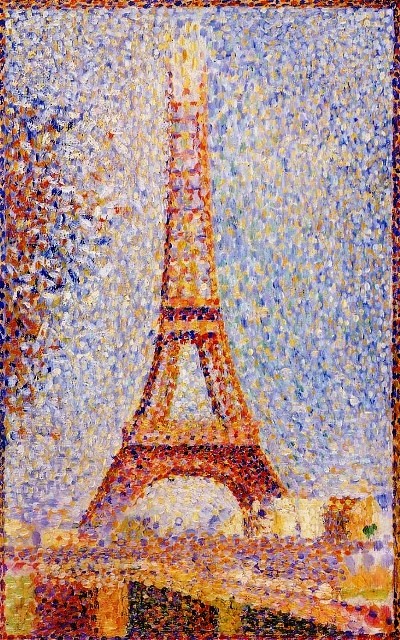 An exquisitely rendered Eiffel Tower shimmering in the afternoon sun. Don't let the simplicity of the shapes fool you — it takes a great deal of thought & observation to get this kind of simple elegance.

He definitely gravitated to the Impressionists' emphasis on light & color, simplicity of form, and the depiction of everyday life.

But unlike the Impressionists' desire to capture the fleeting nature of life — Seurat wanted a sense of stillness in his art, and to freeze a very precise moment in time. Kind of like pausing a movie on your TV. 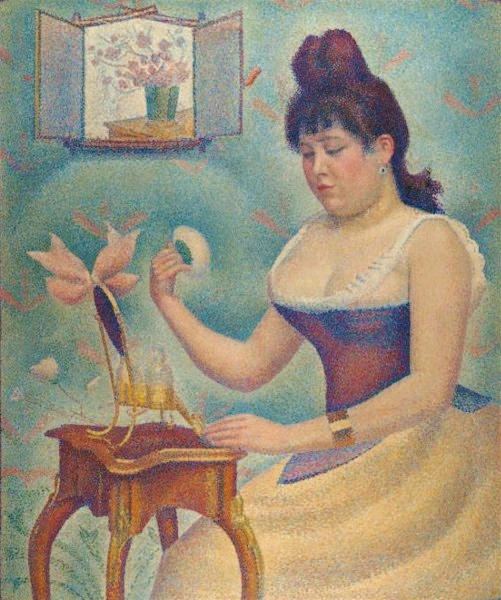 Does anyone else see the above painting as elegant, but then again humorous at the same time? Doesn't it seem like Seurat was making fun of the human preoccupation with vanity & appearance?

To me it seems as if she's berating the powder puff for not being there for her, lol. Or perhaps daring it to screw up. At any rate, she seems to want more than the poor little powder puff can give!

I don't have a clue if this is what the art scholars say about this painting, or what Seurat intended. But that doesn't matter, it's what the observer sees that's  important — not what someone else sees. 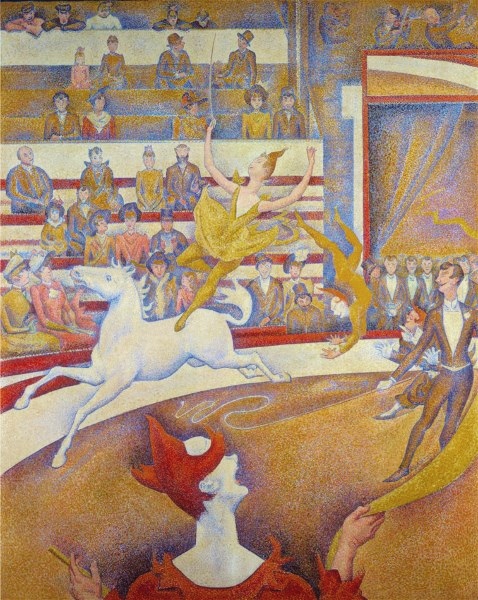 This was the very last painting he was working on at the time of his death. Below you can see a close up of those side-by-side brush strokes, and how they were beginning to take shape. 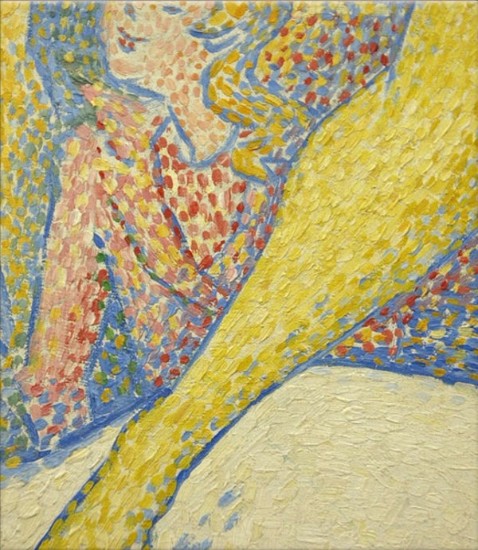 A brilliant man & artist whose life's curtain was drawn much too quickly. Had he lived to old age, I have no doubt that his work would have continued to evolve even more exquisitely.

Among many others, artists like Matisse, Picasso & Van Gogh were very much influenced by his discoveries & methods. They stood on the shoulders of a giant for sure.

A big thanks to one of my very favorite art heroes, Georges-Pierre Seurat — for doing what you did in those brief, but magnificent years.

Comments below are always welcome! I’ll be sure to reply.