In last week's post you may remember me talking about Andy Warhol, and one of his quotes. You also may remember that he was born & raised in my hometown area of Pittsburgh, PA. At any rate, I'm thrilled to get a chance to share my love of his work with you.

Yes, to many, there's at least some of his art that's seen as pretty controversial. His body of work is not all pretty  pictures, and  he himself was considered a somewhat peculiar guy - but then again, I like odd ;-)

One thing's for sure ... love it or hate it, Andy Warhol's work has had a significant impact on the world of art. So today let's talk a bit about Andy Warhol, and look at a small sampling of his art.

Below is a photograph of Andy Warhol, and also his painting of his mother Julia, who had a strong influence on his love of art. She moved to NYC & lived with him there for many years, and assisted him in various aspects of his work.

He was born & raised in Pittsburgh, not too far from the University of Pittsburgh. Coincidentally (fast forwarding several decades), the street that he grew up on was just a couple blocks from where I lived when I attended the university.

He was extremely family oriented, and loved it when his brothers & their families came to visit him in NYC. His nephew James even wrote & illustrated a children's book called "Uncle Andy", reflecting back on his childhood trips to NYC to visit his uncle.

Andy's dog's name (shown with him in the photo below) was Archie. According to the information I've been reading, he also had 25 cats. This was after he moved to New York City in the 1950's to begin the first chapter of his art career as a successful fashion illustrator. And like they say - the rest is history. 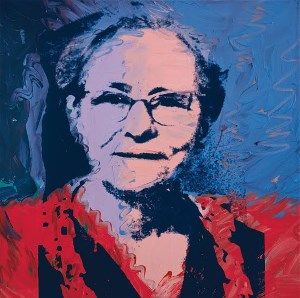 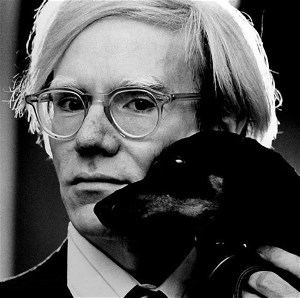 Warhol transitioned out of his first career as a fashion illustrator, and into the gallery scene of fine art in the early 1960's. He became even more well-known in the New York art scene when this group of Campbell soup can paintings (shown below) hit the shelves. Pun intended:) The first time they were displayed in a gallery in 1962, they were even lined up on shelves!

There are 32 of them, each hand-painted by Warhol. They represent the original 32 flavors of Campbell's soup that were being made at the time the paintings were done. You can see how his educational background in commercial illustration contributed to these first paintings.

These paintings are considered part of a genre of art referred to as 'Pop Art'. As a matter of fact, Andy Warhol was one of the most well-known US pop artists of his time. 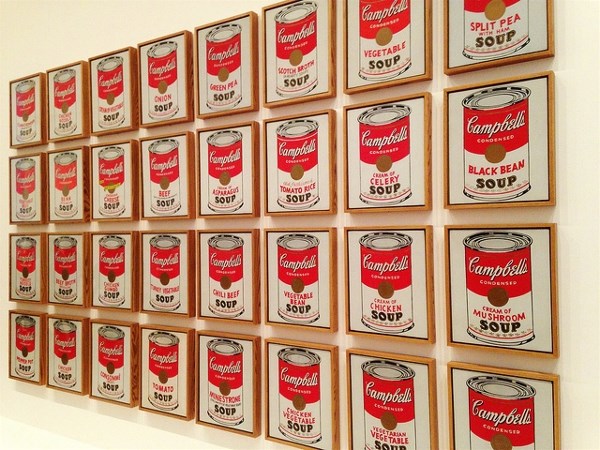 Warhol and many other artists during the late 50's & 60's, were interested in making art based on ordinary, everyday objects easily found in their environment.

As Warhol said himself, “Pop artists did images that anyone walking down the street would recognize in a split second - comics, picnic tables, men’s pants, celebrities, refrigerators, Coke bottles.”

This was a fresh, groundbreaking time in art, and was in direct response to the non-objective style of Abstract Expressionism of the 40's & early 50's. (Think Jackson Pollock & his big, bold splashes of paint.)

Warhol's work & many of his contemporaries turned the art world upside down. Those following the art scene began questioning what was considered art, and what shouldn't qualify as such.

One of the main points that Andy Warhol & his contemporaries were making was the very real possibility that art is in everything, even the mundane.

He transitioned from painting into many other forms of art, such as silk screening, printmaking, experimental film, magazine publishing etc.

Below are a couple examples of this transition.

The first is a colorful screen print of German poet & playwright Johann Wolfgang von Goethe. The other is one of John Lennon, and is done in the repetitive fashion & bold use of color for which Warhol became known.

He loved doing works of famous (& sometimes controversial) people. In an exhibit I saw  a few years back, there was even an entire wall of huge screen prints of Chairman Mao.

Some say Warhol focused on portraits of celebrities in order to bring publicity to himself & his work. In addition to being a brilliant artist, he was also brilliant at marketing for sure.

As you can see, he also enjoyed working with a highly saturated color palette which I personally love, love, love! 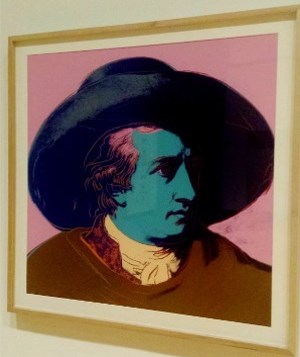 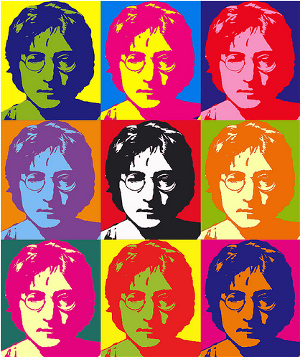 Below are some images I created through a website called PhotoFunia, using a couple of the Warhol filters & my mug:) What fun!

Andy always said that each of us will have 15 minutes of fame at some point during our lives - well here's mine lol. 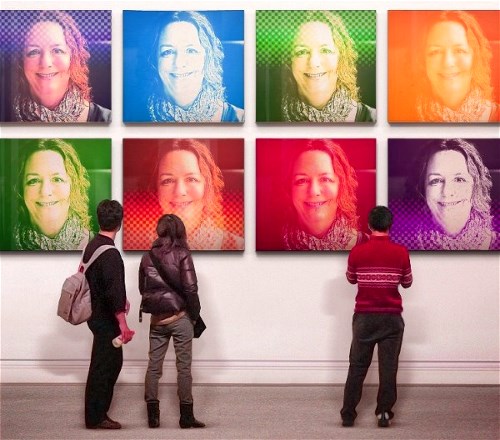 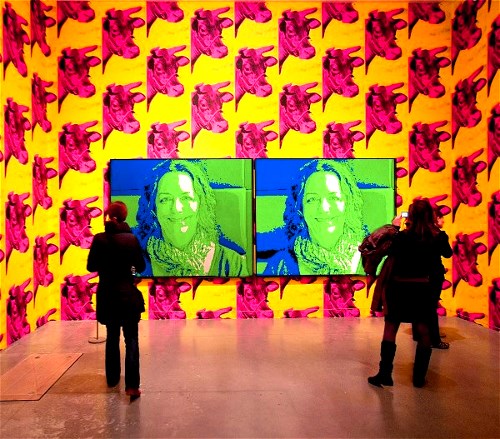 I could go on for quite a while about Andy Warhol's art, but in the interest of possibly losing your attention, you always have Google for further research if this has peaked your interest.

He was a highly prolific artist (there are crates & crates of his works still in storage at the Warhol Museum), and in his time was also an extremely controversial artist.

His use of repetition, unique & bold color choices, silk screening, and the paintings of those 32 Campbell soup cans are probably what he is most remembered for.

His art has a new, younger audience these days, and continues to thrive even more brilliantly now. And yes, he'll always have a special place in my heart, since we were both born & raised in the same neck of the woods.

That about wraps it up, thanks for your interest.

Since Andy Warhol was such a controversial artist, and still is - I would love to hear how you feel about his work. Do you love it or hate it? If so, why? Take a few minutes, and give me your thoughts below. I'd love to chat about art with you.

Have a great weekend everyone, and be sure to do something fun! #itmatters