Last week we talked about a quote by French artist, Claude Monet. If you missed it, you can find it here. In keeping with a Monet vibe, we're going to take things a step further and talk about his prolific water lilies painting series.

Claude Monet was born in 1840 in Paris. His father was a grocer, and his mother a singer. Although born in Paris, he spent most of his childhood living near the beaches of Normandy. You'll see when we get to his water lily paintings how much the sea informed his work.

Along with several other artists, he thumbed his nose at the more traditional Paris art world, and instead they conducted their own exhibitions geared towards this new form of art.

At least initially, impressionist art was snubbed by many of their contemporaries. Because it was less about putting down every little detail, and more about the loosely woven impressions of light, color & shape - their art was considered "radical" & "gauche" at the time.

Wow how things have changed ... now Impressionism is appreciated as the brilliant art movement it was, and of course Monet & his "radical" gang are now considered art gods. 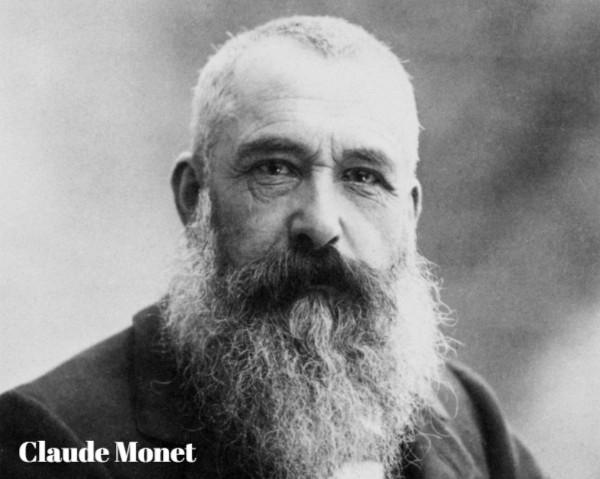 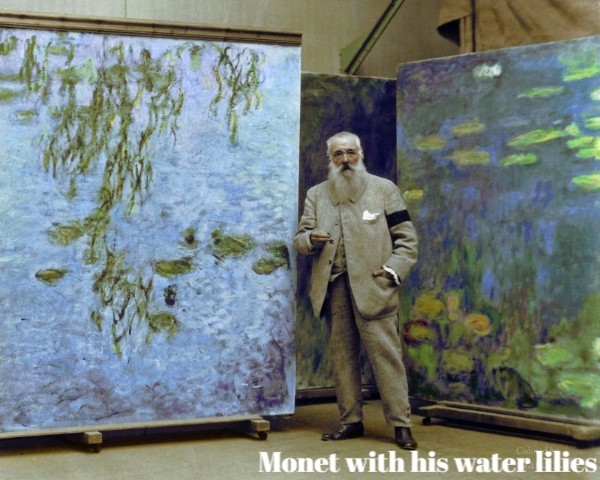 Today we're going to focus on a specific chapter of Monet's long & prolific art career. Let's look more closely at the 2nd half of his life - the time he spent surrounded by his lush gardens in Giverny, France.

After the death of his wife, Monet decided to move to Giverny, a village he discovered in Normandy while traveling by train. It was the beginning of what would be a highly productive & profound time of his life. The gardens he planted at his new home were to be his painting muse & source of joy for many years, until his death at age 86.

Monet was fascinated by Japanese woodblock prints - more specifically those composed of bridges, gardens & flowers. So much so they inspired him to spend many years at Giverny developing similar gardens on his property.

The crowning glory of his extensive gardens was his pond of water lilies with a Japanese bridge crossing over it. He spent hours here observing & painting.

Monet enjoyed working in a series, concentrating on the changing light & the passing of seasons on his chosen subject. The water lily series was his most prolific - which in total was approximately 250 paintings.

Let's take a closer look at just a few of these water lily paintings.

Painted in 1899, this is one of his earlier water lily paintings depicting his lovely Japanese bridge. During this time his paintings focused on a big picture, landscape view.

(You'll see later that he becomes more enamored with the surface of the pond itself, and less about the scenery surrounding it.) 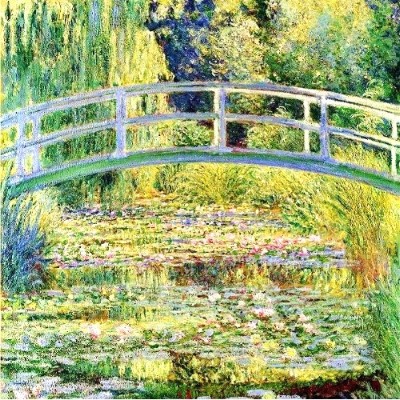 In this painting from 1904 he starts to draw the viewer's eye to the pond's surface. Although it still shows the edge of the pond & vegetation along its bank in the background.

Thus, the viewer is still looking "at" the scene, and not quite immersed in it yet. 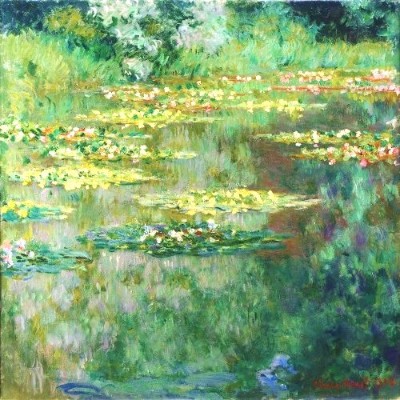 Here in this one from 1905, even though only the pond's surface is in view, the subject is still depicted in such a way, due to the reflection of the trees & the sense of depth, that we're still looking "at" the scene. 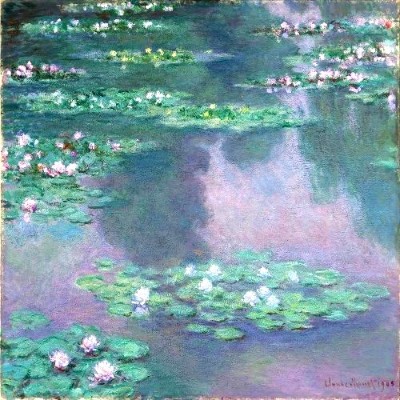 Here the viewer is no longer looking at the pond, but is completely immersed in it. All the visual markers like the edge of the pond, the sky & the distant trees have all disappeared. There's no sense of time or space here, only the pond's surface.

He's invited us into the water. 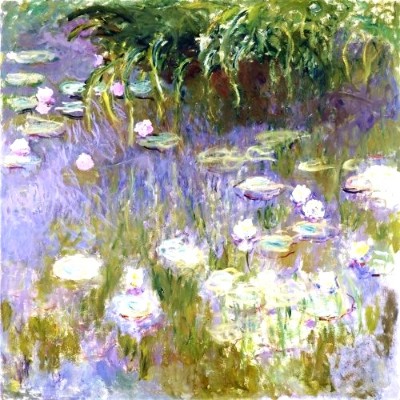 The culmination of the water lily series are several HUGE canvases (we're talking 7 x 40 feet) done in the 7th decade of his life. He dedicated these paintings to his homeland as a "monument to peace" on the day after Armistice Day 1916 .

They are permanently installed in two large oval rooms at the Musee de L'Orangerie in Paris. The entire setting was designed specifically by Monet for these canvases - including the most beautiful filtered light from the scrim covered skylights above.

I was blessed to get to visit here & immerse myself in Monet's water lilies, as he intended. They are magical to behold.

(It's hard to imagine this tiny image below is of one of those canvases, and actually measures 7 x 40 feet.)

So that's a little about Monet & his water lilies. I've only begun to scratch the surface, and as always encourage you to investigate more on your own.

Below is my humble ode to Monet & his water lilies... 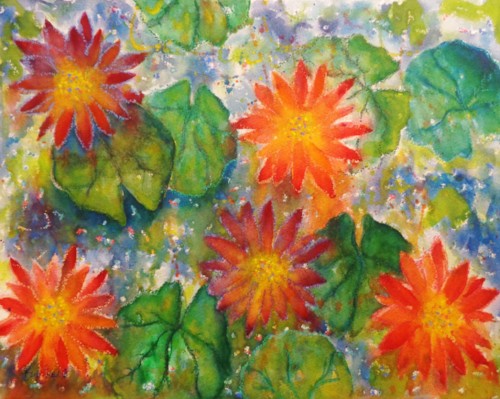 Now it's time to go make something, or at least do something fun :-)

P.S. I would love to hear from you! You can do so by going to my contact page and sending me a message — your creative heart & voice matter.