Henri Matisse was an extraordinary artist and I love, love, love his work!!!!!!!!!

He was one of the most revolutionary & influential artists of his time.

He was born to a humble & rather somber life in northern France where the winters were rainy & cold. His father's business was in grain, and his upbringing was quite strict.

However, his mother was able to strongly influence his artistic growth in many ways. When growing up, the family grain store also sold house paints. His mom mixed the paints, and helped customers with their color choices, as Matisse watched & listened.

She was also an accomplished porcelain painter, and encouraged her son to appreciate art & color. She advised him to listen to his own heart, and disregard the "rules" of art.

So starting at a very early age, he loved color - and as you will see in his work, continued to love it all of his life!

Another major influence on his work was the town he grew up in, which was known far & wide for producing the finest fabrics & lace for the Paris couture houses.

As we take a look at the progression of his art, you'll see how the patterns & colors from his upbringing continue to influence his work all of his life.

However, his practical-minded father encouraged him to pursue law. Wanting to please him, Matisse moved to Paris to study law when he was 18.

But thank goodness providence intervened, and having to return home during a bout of illness, his mother provided him a paint set to occupy his time as he recuperated.

He said later about that paint box,

"From the moment I held the box of colors in my hands, I knew this was my life. I threw myself into it like a beast that plunges towards the thing that it loves."

His artistic endeavors didn't start out very colorful, nor were they radically different from art that was already happening during that time.

This painting was done in the early stages of his life as an artist. It contains muted & earthy colors, a great amount of detail, and very little light. Its overall tone is quite somber. 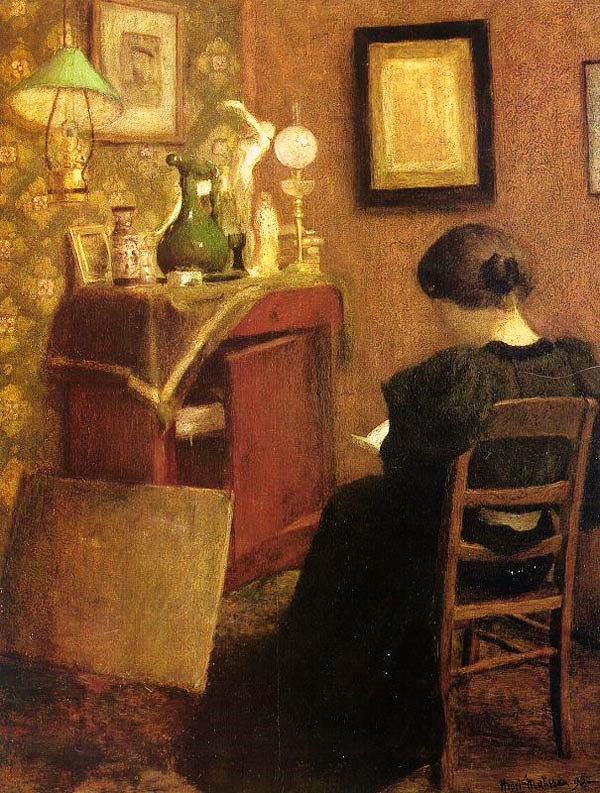 After he recovers, Matisse returns to Paris in 1891, but this time he's determined to study art. Impressionism has gained center stage as one of the freshest art movements not only in Paris but worldwide, and he is about to become heavily influenced by it.

Color choices & reducing detail are the two things that Matisse radically changes about his art when he begins observing the works of the Impressionist artists, and starts to rely on his own creative instincts as his mother so lovingly instilled in him.

This painting begins to show the influence of Impressionism on his work. A lot more light floods the painting, and he starts reducing the amount of detail. Overall, this creates a more lively & inviting scene. 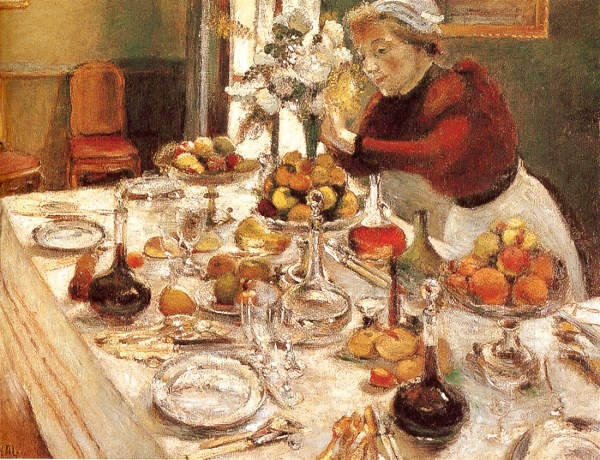 And then there was color! But what's amazing is that even though the colors he uses here are highly saturated & bright, he is still able to maintain a sense of peace & serenity. 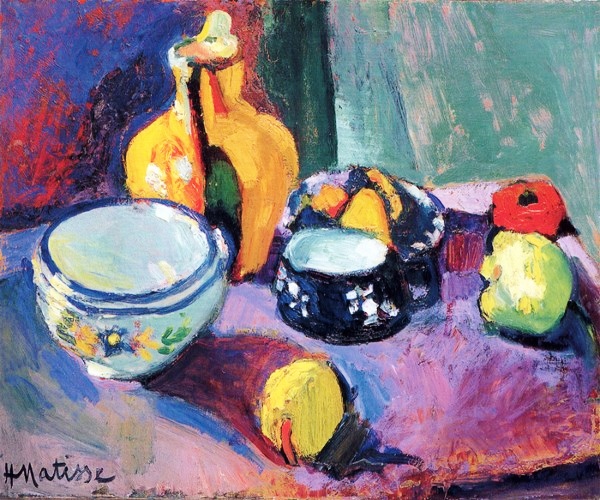 As you can see in this painting, Matisse is heavily influenced by the textile houses in his hometown, and continues to be so all of his life. He's known to collect fabrics which travel with him wherever he goes. 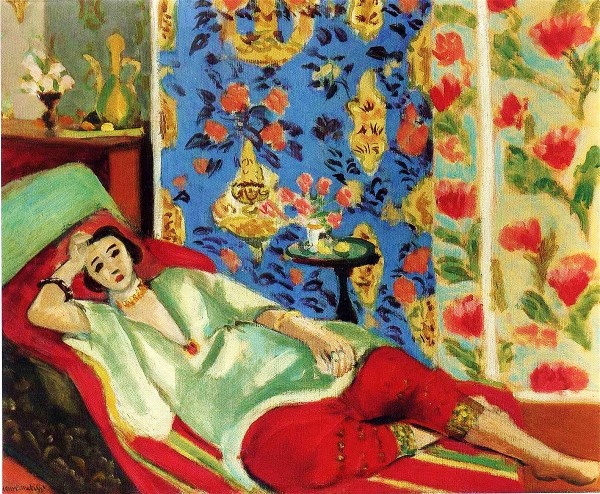 Given the number of different patterns in this painting, it's amazing to me the unity Matisse achieves on this one. His use of black & white gives it a sense of balance. 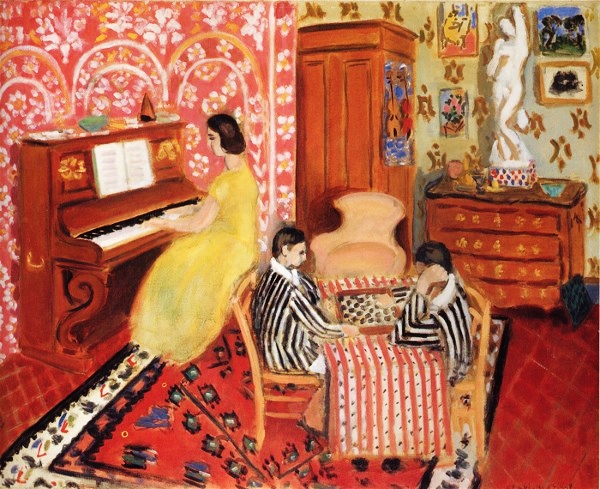 In the later years his life, after a bout of cancer that leaves him confined to a wheelchair, he creates some of the most remarkable art of his life.

His instinct & focus has been honed to a razor sharp edge by now, and he focuses on his extraordinary paper cutouts. And in many ways he returns to a more childlike art, but with that amazing wisdom & years of experience shining through. 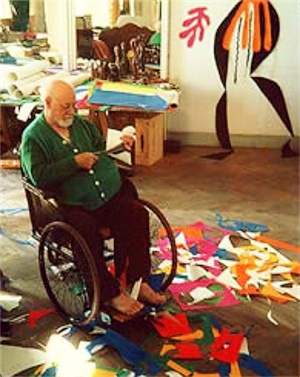 In this particular cutout piece the spiritual elements are evident, and the chosen palette is extremely crisp & bright. 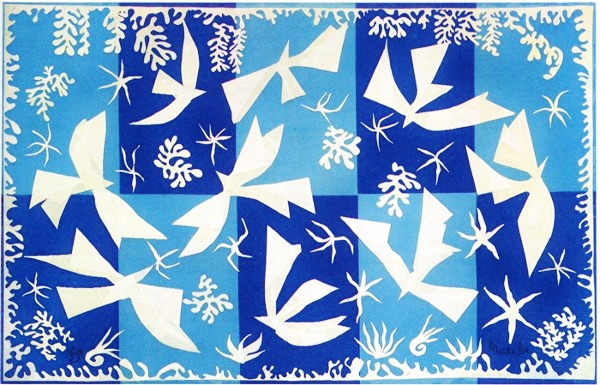 I love the organic nature of this cutout, and his choice of mainly primary colors is delightful. Matisse refers to his process of cutting shapes out of colored paper as "painting with scissors". 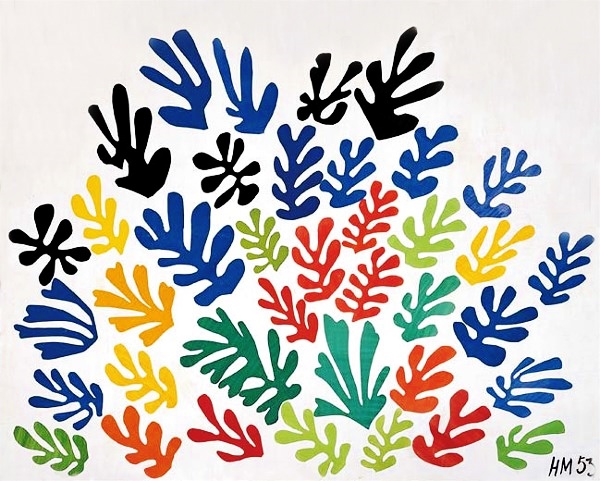 During the last chapter of his life, he also focused a great deal of his efforts designing & building the Chapel of the Rosary in southern France.

Matisse re-interprets his beautiful paper cutouts in the patterns of the stained glass windows. He manages to have it completed before he dies. 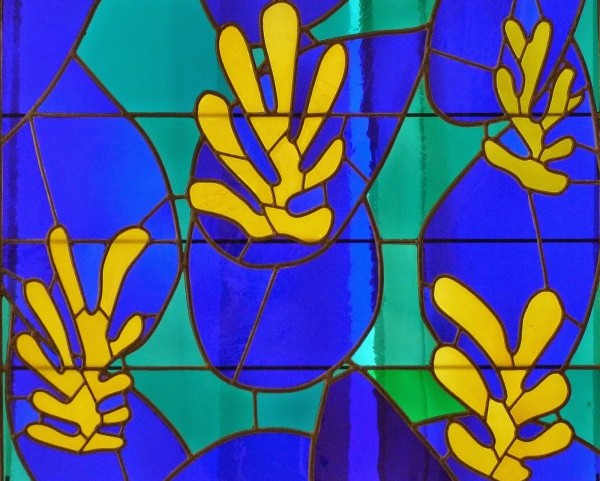 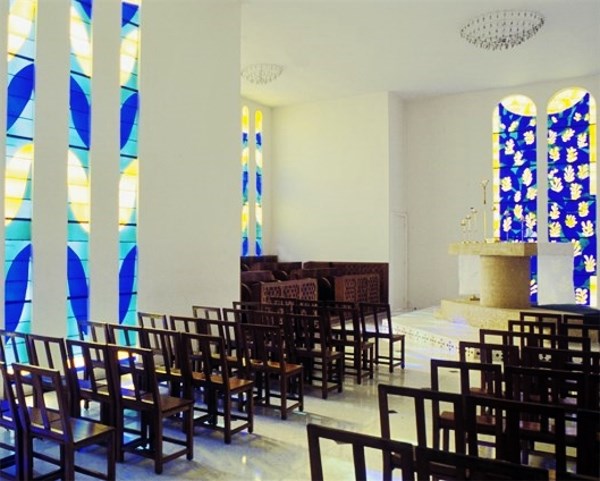 I've only shown you a small glimpse Henri Matisse, and the art he created, and so I encourage you to take a deeper dive to learn more about this exceptional artist.

I'll leave you with one his most memorable quotes:

"Never ruin a good painting with the truth." -Henri Matisse

Do you like Henri Matisse's work? Is there some of it you like, but some you don't? Is there anything about his work that has inspired you to make &/or collect a piece that is in the same spirit as his?

If so, I'd love to hear all about it in the comments below.

The more we chat about art & creativity, the better we get at discerning what we love, and the less time & money we spend on making or buying what we don't love!