Wanna know what it takes to turn an ugly painting of a raven into a pretty darn good one?

That’s right – that good old fashion stubbornness & perseverance to hold on tight & get it right.

Like a tigress that just won't let go of a big meaty bone ... or a tire lol.

Ok, so I’m being brave & vulnerable here, and showing you one of my “uglies” (there have been MANY).

Promise not to laugh, ok?

The image below has my side-by-side paintings of a raven.

The one on the left is my “before” painting. I call this the woeful, and VERY unfortunate anemic raven.

The one on the right is the “after” painting, which is of course AFTER I painted over that pitiful bird on the left thank goodness. 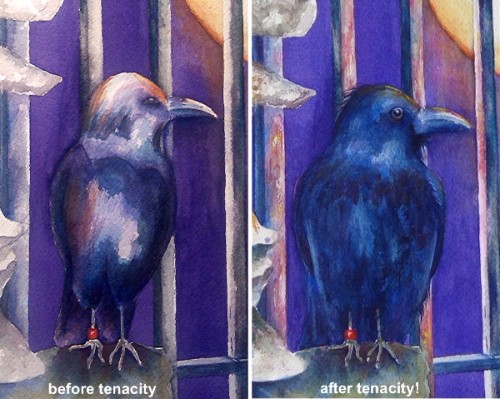 Yes, believe it or not in my head I thought the bird on the left was an ok raven (my mind is very good at rationalizing).

But then, it finally sank in. Hands down, it was the most pitiful looking raven that I could have possibly painted.

It was horribly conflicting for me to finally admit this to myself!

Ok, perhaps not that horrible, but still.

Then, after much mumbling & a few choice words - my TENACITY kicked in. (I like to think of tenacity as anger & frustration that turns itself into rocket fuel.)

What ensued after that was hours of scouring the internet for what resulted in a multitude of raven photos - which I studied & pondered & studied some more.

After much muttering & discourse with my creative, but very stubborn muse - I picked up a pencil & started sketching over the bungled bird.

I gave her a more robust breast, and also a fluffier set of tail feathers (shake it baby).  I also noticed after studying the online photos that a raven’s beak is very pronounced. So I sketched her's bigger, and a bit less “hooked”. The eye was all wrong – a raven’s eye is much more round than I initially had it, so I changed that too.

ONLY THEN did I pick up my brush & plow back in with paint to see what I could do. I gave her lots more blacks, midnight blues & loads of texture.

… and then, as the French say, voilà!

The raven graciously decided to reveal her beautiful, haunting self to me. Perhaps a gift from her spirit for the perseverance it took to make it the best darn raven that I could possibly muster.

I’m not bragging here, I’m just saying – if YOU have a passion or a dream, and your first attempts aren’t quite good enough for your satisfaction, then redo it again & again & again.

Keep going until it is BEYOND good enough.

Until it's the absolute best you can give.

This is not failure, it’s experience:)

Below is my painting "Tower Raven" in its entirety. Her name is Hugine. She was one of the captive ravens at the Tower of London when I visited there in 2010.

Just imagine if my inner tenacity had not kicked in, and she had been left to live on the canvas as the sickly bird she started out as. Now that would’ve been pretty darn sad!

Here's a link to the painting in my shop 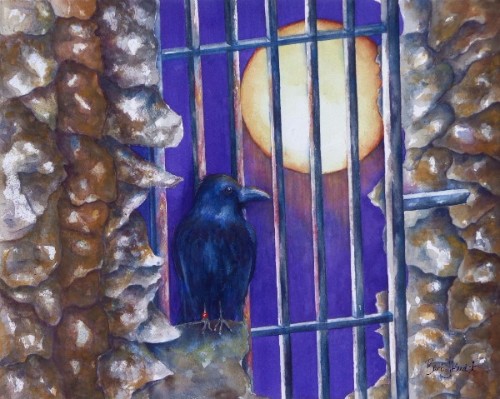 How have you shown tenacity & perserverance in your own creative life? And how did it turn out? OR do you continue to hang in there with all you've got, not sure how it's going to go?

I'd love to hear all about it in the comments below.

Your creative voice matters to me. Always.