This week's blog is not just about one artist, but several. And not just visual artists, but writers as well.

You'll learn a little more about the creative masters of the past, and how many of them not only made a living from one form of art, but also enjoyed mastering other forms of creativity in their everyday lives.

Painters such as Salvador Dali & Pablo Picasso dabbled in writing, and writers such as J.R.R. Tolkien & Kurt Vonnegut enjoyed creating in the visual arts.

I know, you may just be getting started in one area of creativity, and here I am talking about artists & writers who have crossed over the line to the other side!

But here's the thing, there really are no sides when it comes to art ... only a thin, blurred line separates most artistic endeavors.

Don't feel you have to limit your creative output (or input, if you're a collector) to one medium. It's uncanny how seemingly different artistic mediums can inform & compliment each other in so many ways.

If you've pretty much stuck to one until now ... hey, who's to say what this blog post just might encourage you to try?!!

"Painting is silent poetry,
and poetry is painting
with the gift of speech."

Writing & painting are most definitely related. I live with a writer/poet, and we also share a studio. We discuss our work as we go, and the amazing part is, we feed off of each other's art in so many ways.

Like a writer, when I paint I'm attempting to tell a story, or convey an idea &/or philosophy. And when the hubster writes, like a painter, one of his goals is to paint a picture &/or scene in  the mind's eye of his audience.

There are many famous visual artists in history who also spent a great deal of their time writing. And there are also plenty of famous writers who spent their time in the visual arts like drawing & painting.

Instead of taking a deep dive into any one particular artist, we're going to take some time to explore several artists who "crossed over to the other side" in their creative pursuits.

You may be surprised to know that J.R.R. Tolkien, who of course is very well known & loved for writing, The Hobbit and The Lord of the Rings trilogy, also spent a great deal of his time creating beautiful illustrations for these works, and many others.

Here's a photo of him, and some of his illustrations: 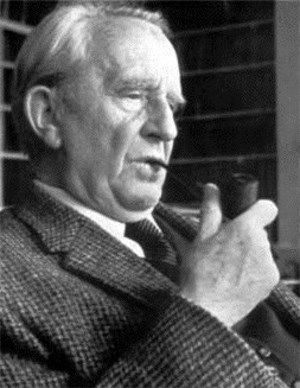 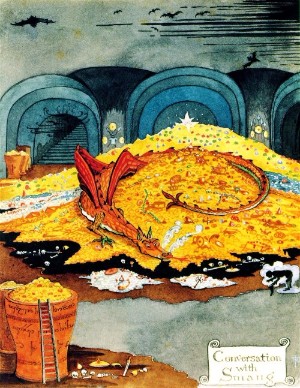 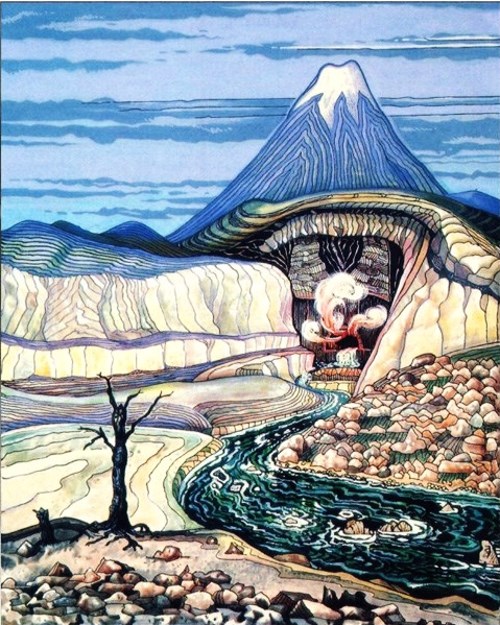 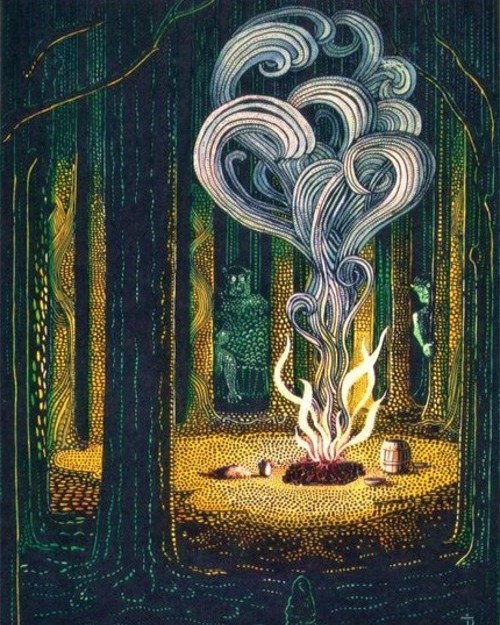 Another famous writer/poet who is equally well-known for his paintings and printmaking is William Blake. Long before I became aware of his visual art, I fell in love with his poems. No doubt because his poems are so vivid & captivating to my visual mind.

Here's a portrait of him, and a few of his poems which were illustrated by him as well: 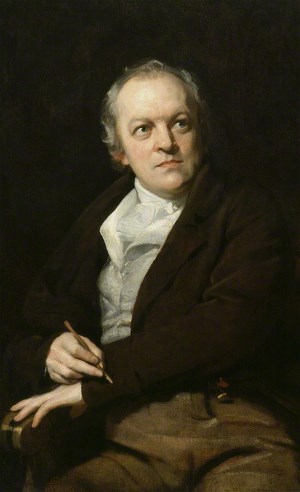 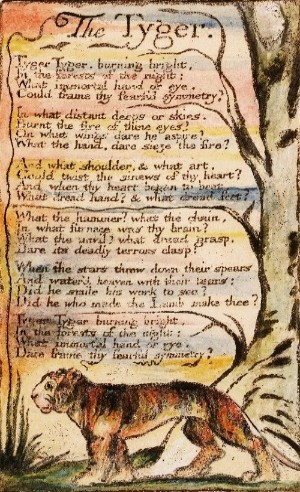 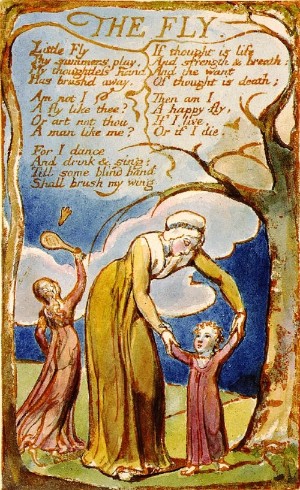 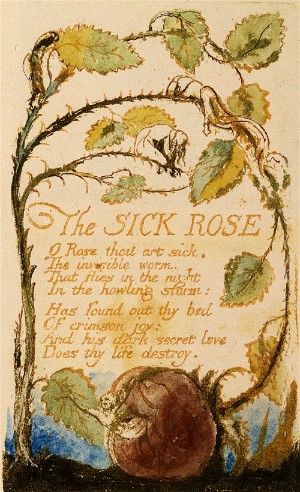 I'll offer you one more example of a brilliant writer, who also spent time dabbling in the visual arts - Kurt Vonnegut, who wrote the well-known novel Slaughterhouse-Five, among many others.

Below is a photo of him, what his signature looks like (a work of art in itself), and two of his many drawings: 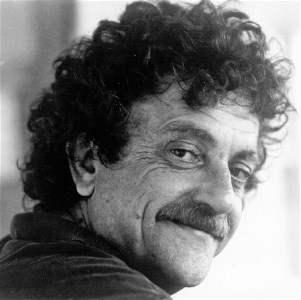 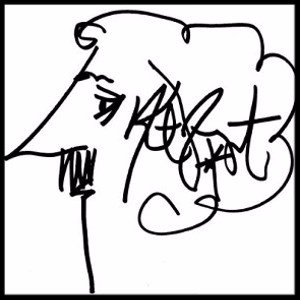 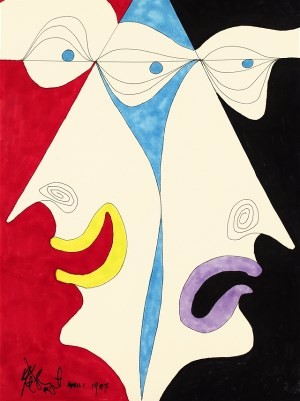 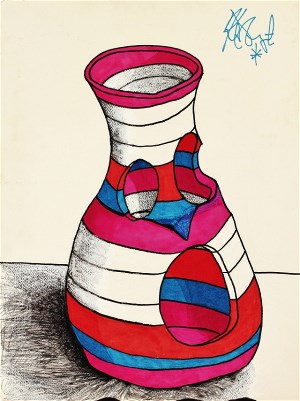 Now, let's flip it a bit, and instead talk about visual artists who enjoyed dipping their toes - and their pens, into the art of writing.

My first example is the brilliant painter, Salvador Dali. He was the master of the Surrealist art movement, and consummate self-marketer. However, he also did a great deal of writing.

His writings include poetry, fiction, screenplays, and many autobiographies (he was never shy about self-disclosure) including, "The Secret Life of Salvador Dali".

Speaking of the gift of spring, here's one of the poems he wrote in conjunction with his painting, Metamorphosis of Narcissus:

"Under the split
in the retreating black cloud
the invisible scale of spring
is oscillating in the fresh April sky.

On the highest mountain,
the god of the snow,
his dazzling head bent over
the dizzy space of reflections,
starts melting with desire
in the vertical cataracts of the thaw
annihilating himself loudly
among the excremental cries of minerals,
or between the silences of mosses
towards the distant mirror of the lake in which,
the veils of winter having disappeared,
he has newly discovered
the lightning flash of his faithful image."

Below is his photo & the corresponding painting, Metamorphosis of Narcissus: 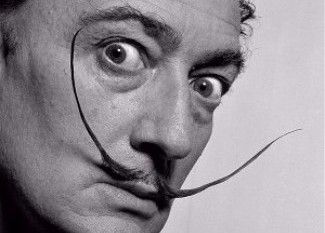 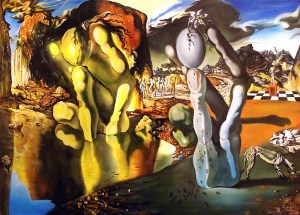 Then there's the extraordinary painter, Vincent van Gogh. His paintings are most admired for their expressive color, broad oil brushstrokes, and moving subject matter.

But there was another creative side to him, the writer of letters.

His brother Theo's wife, Johanna, after her husband's death, painstakingly compiled these letters into a collection which was published in 1914. The collection consists of over 700 letters that Vincent wrote to his brother over the years, as well as to many others.

There were also many other famous painters who were extremely prolific in writing letters - Eugène Delacroix, Claude Monet, and James Whistler, to name a few. They & many other artists wrote thousands of letters.

Below is Van Gogh's self-portrait, his Sunflowers painting, and one of his letters to his brother. Isn't the letter beautiful? Lots of sketches integrated into the words, and the writing style is just so lovely.

These letters are brilliant examples of combining words & pictures into one cohesive art form, and demonstrating just how much the two seemingly different mediums actually compliment each other. 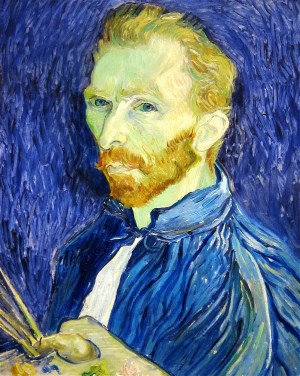 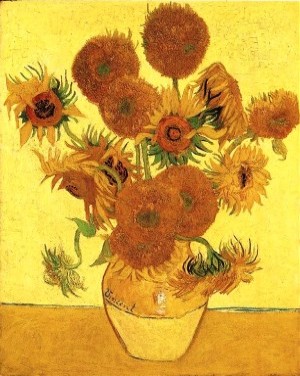 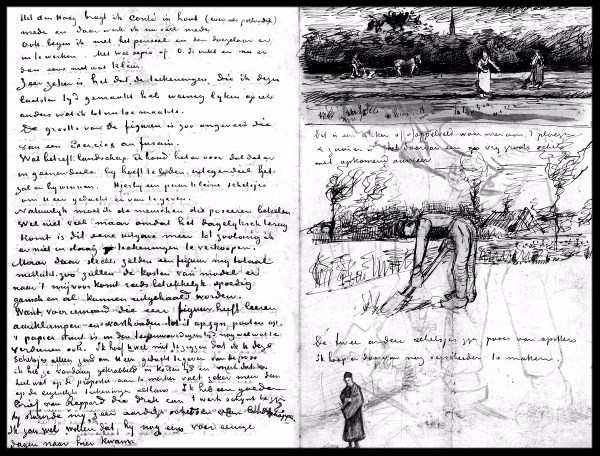 Ok, one more example of a famous painter who was also a prolific writer, Pablo Picasso. He wrote poetry every single day from 1935 (when his wife Olga left him), until the summer of 1959. I have no idea how many poems that is, but it sounds like a bunch!

Here's an example of one his poems:

Isn't that luscious?! He even wrote in colors!

Here's his photo, and one of his paintings, Woman Weeping: 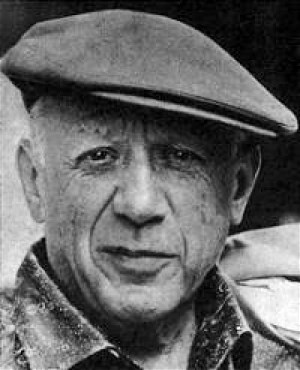 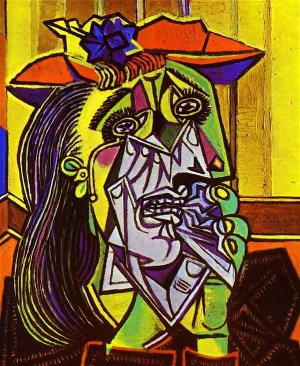 I leave you with this inspiring letter from Kurt Vonnegut that he wrote to a group of high school students & teachers about pursuing multiple creative outlets, and how important it is one's happiness:

I thank you for your friendly letters. You sure know how to cheer up a really old geezer in his sunset years. I don't make public appearances any more because I now resemble nothing so much as an iguana.

What I had to say to you, moreover, would not take long, to wit:

Practice any art, music, singing, dancing, acting, drawing, painting, sculpting, poetry, fiction, essays, reportage, no matter how well or badly, not to get money and fame, but to experience becoming, to find out what's inside you, to make your soul grow.

Seriously! I mean starting right now, do art and do it for the rest of your lives. Draw a funny or nice picture of Ms. Lockwood, and give it to her. Dance home after school, and sing in the shower and on and on. Make a face in your mashed potatoes. Pretend you're Count Dracula.

Here's an assignment for tonight, and I hope Ms. Lockwood will flunk you if you don't do it: Write a six line poem, about anything, but rhymed. No fair tennis without a net. Make it as good as you possibly can. But don't tell anybody what you're doing. Don't show it or recite it to anybody, not even your girlfriend or parents or whatever, or Ms. Lockwood. OK?

Tear it up into teeny-weeny pieces, and discard them into widely separated trash receptacles. You will find that you have already been gloriously rewarded for your poem. You have experienced becoming, learned a lot more about what's inside you, and you have made your soul grow.

God bless you all!
Kurt Vonnegut

Take some time to write or draw something, then tear it up and throw it away. Sing in the shower. Dance your way from the kitchen to the den. Don't just load up your plate at the salad bar - make it pretty. (I once had a cute little old lady tell me at a salad bar that my salad looked like a work of art - true story!)

Whatever you're doing in your daily life, put a spark of creative energy into it. It'll help your soul grow into something even more lovely than it is right now :)

I leave you with a photograph I took in Ireland, and the mini poem I wrote (yes, I did that!!!) to go along with it... 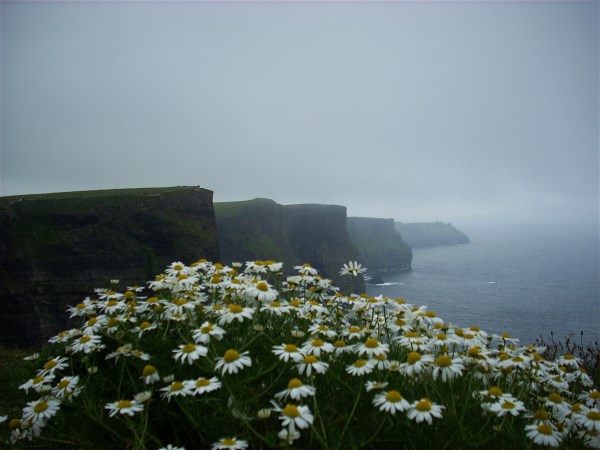 Cliffs of Moher, Ireland ©
"The Cliffs of Moher on a foggy day.
Lots of rebel daisies seem to be saying ...
"Yes! Even fog makes me happy!"
~ Barb Toland

So just jump in there, full creative steam ahead! Infusing creativity into your everyday life will create a life worth showing up for, no matter what your circumstances. Promise.

Where do you find creativity showing up in your everyday life? Are you fairly sufficient in one art medium, but find yourself messing around in another just for fun? If you're purely an art collector, are you drawn to multiple mediums? Why do you think that is?

I'd love to hear all about it in the comments below. Your artistic voice & heART matter to me ... always!